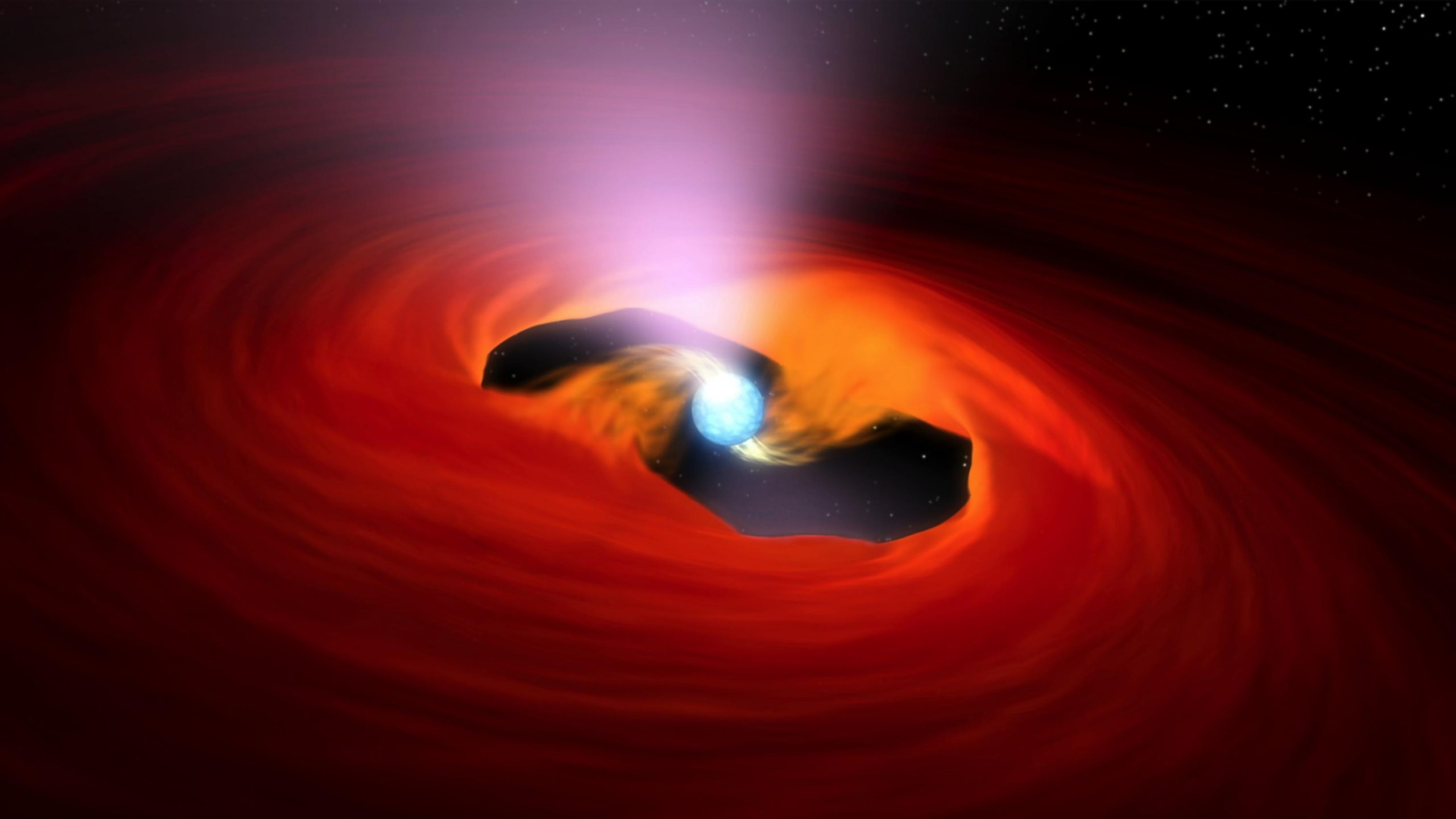 22 Jun Accreting pulsar caught in the act of ‘powering up’

Posted at 12:37h in Press Releases by Daniel

Observations across a range of wavelengths (optical, ultraviolet and X-rays) made in 2019, including those from the Southern African Large Telescope (SALT) have captured – for the first time – the powering up of the outburst from an accreting neutron star. It took 12-days for the accreted material to spiral onto the neutron star, triggering an X-ray outburst thousands of times brighter than our Sun.

The scientists observed an ‘accreting’ neutron star as it entered an outburst phase in an international collaborative effort involving five groups of researchers, seven telescopes (five on the ground, two in space), and 15 collaborators.

“Optical spectra obtained with SALT were crucial in demonstrating the powering-up,” said the SALT Transient programme lead, Dr David Buckley. “We observed on 6 occasions during August 2019. The first two observations showed it was very faint, while by the time of the third observation, on 6 August, is was clearly in outburst. This demonstrates the importance of flexible telescope scheduling that can quickly react to changing circumstances,” he concluded. SALT has made many advances in the study of compact objects, like neutron stars and black holes, including studies of the most energetic events in the Universe, like gamma-ray bursts and gravitational wave events.

It is the first time such an event has been observed in this detail – in multiple frequencies, including high-sensitivity measurements in both optical and X-ray. This illustration shows a neutron star — the core of a star that exploded in a massive supernova. This particular neutron star is known as a pulsar because it sends out rotating beams of X-rays that sweep past Earth like lighthouse beacons.

The physics behind this ‘switching on’ process has eluded physicists for decades, partly because there are very few comprehensive observations of the phenomenon.

The researchers caught one of these accreting neutron star systems in the act of entering outburst. They witnessed the onset of the outburst, from the first sign of optical activity to the beginning of X-ray emission, all the way to the end of the outburst.

The observations revealed that it took 12 days for material to swirl inwards and collide with the neutron star, substantially longer than previously thought.

“These observations allow us to study the structure of the accretion disk, and determine how quickly and easily material can move inwards to the neutron star,” said study lead PhD candidate Adelle Goodwin from the Monash School of Physics and Astronomy in Melbourne, Australia.

“Using multiple telescopes that are sensitive to light in different energies we were able to trace that the initial activity happened near the companion star, in the outer edges of the accretion disk, and it took 12 days for the disk to be brought into the hot state and for material to spiral inward to the neutron star, and X-rays to be produced,” she said.

In an ‘accreting’ neutron star system, a pulsar which is a dense remnant of an old star, strips material away from a nearby star, forming an accretion disk of material spiralling in towards the pulsar, where it releases extraordinary amounts of energy – about the total energy output of the sun in 10 years, over the period of a few short weeks.

This is so energetic that most of the radiation is released in the highest energy portion of the electromagnetic spectrum: in X-rays.

Some accreting neutron stars are not always active and can spend years in a quiet state, known as quiescence, where they emit barely any light at all and accrete at a very low rate. They can suddenly go into outburst and become extremely bright in X-rays for around a month.

What the researchers saw was unexpected: it took 12 days from the first sign of increased optical activity before any high energy X-ray emission was observed.

This is longer than anyone thought it would take, with most theories suggesting there should be only a two- to three-day delay.

“This work enables us to shed some light on the physics of accreting neutron star systems, and to understand how these explosive outbursts are triggered in the first place, which has puzzled astronomers for a long time,” said New York University researcher, Dr David Russell, one of the study’s co-authors.

Accretion disks are usually made of hydrogen, but this particular object has a disk that is made up of 50% helium, more helium than most disks. The scientists think that this excess helium may be slowing down the heating of the disk because helium “burns” at a higher temperature, causing the “powering up” to take 12 days.

The research, led by PhD candidate Adelle Goodwin from the Monash School of Physics and Astronomy in Melbourne, Australia, was featured at the recent 236th virtual meeting of the American Astronomical Society meeting (1-3 June 2020), before it is published in Monthly Notices of the Royal Astronomical Society. Adelle leads a team of international researchers, including her supervisor, Monash University Associate Professor Duncan Galloway, and Dr David Russell from New York University Abu Dhabi and Dr David Buckley from the South African Astronomical Observatory.

The preprint of the submitted paper is available on the Astro-PH arXiv here: https://arxiv.org/abs/2006.02872