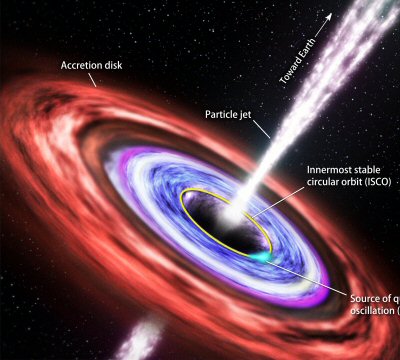 30 Nov QPOs with a pinch of SALT

Posted at 00:05h in Astronomy Articles by Thea Koen 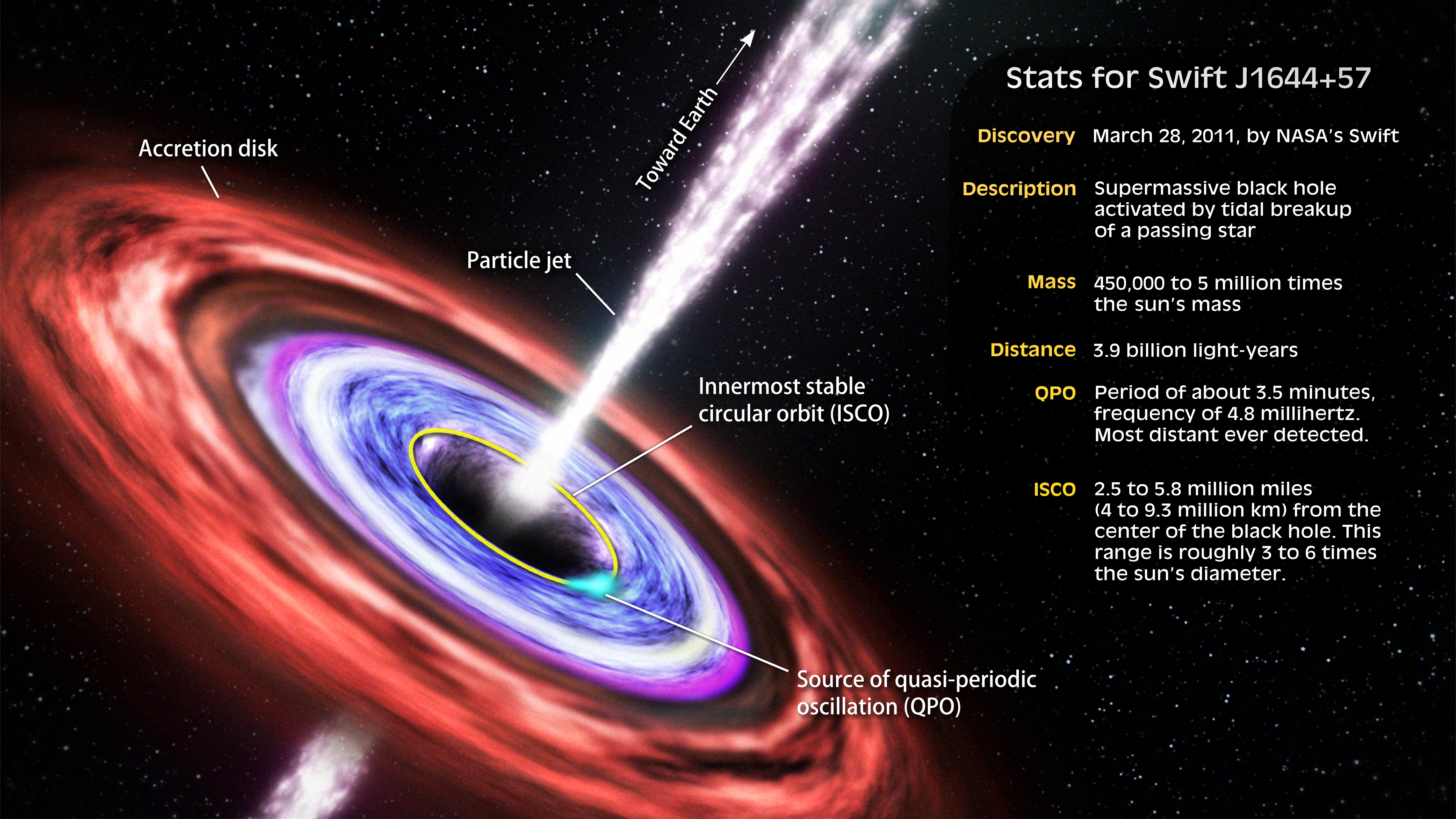 The broadest description of accretion is this: Material falls onto an object. But of course, if that were the full story, throngs of astronomers would be jobless! Accretion occurs in a diverse variety of astrophysical objects, from the supermassive black holes at the centres of galaxies, billions of times more massive than our sun, to the cataclysmic variable stars, so compact that they will easily fit inside the surface of our sun. Accretion is the process by which stars are born from the interstellar medium. It powers the most luminous objects in the universe. The main process that drives all this is of course, none other than gravity – inescapable, monumental, ubiquitous.

If a biologist were to look at the distribution of stars in the universe, the first thing she may tell you is that they are gregarious creatures – they prefer to have company. They typically form in groups, associations or clusters. When two stars orbit each other in a gravitational dance, astronomers refer to them as binary. (This is different from a visual double star as seen in the night sky, which may be a binary, but could also just be a chance alignment). In fact, of the closest 50 stars to the sun, something like 75 are binary – that means many of them are in triple, quadruple, or quintuple systems! Isolated stars like our sun are a comparatively rare occurrence.

When a binary pair are close enough to each other, interesting things begin to happen. Imagine we have two stars in orbit around each other, and we can play with the distance between them. As they get closer to each other their surfaces are distorted by each other’s gravitational pull, becoming elongated towards the gravitational centre. The surface of the stars go from spherical to becoming tear-drop shaped (or pear shaped!). The critical point is reached when we decrease the distance between the stars so much that the tips of the tear-drops meet at the gravitational centre. The surface that contains the stars at this critical point is known as the Roche lobe. At this point, the stars are close enough to each other that gas can flow from one star to the other – accretion takes place! 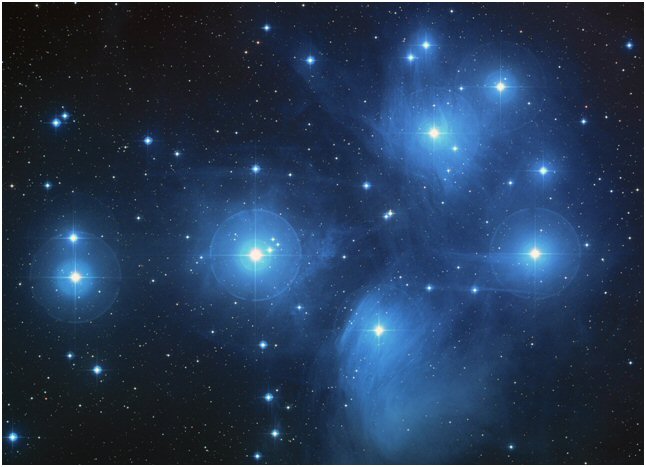 The Pleiades, an open cluster consisting of approximately 3,000 stars at a distance of 400 light-years (120 parsecs) from Earth in the constellation of Taurus. It is also known as “The Seven Sisters”, or the astronomical designations NGC 1432/35 and M45. The Pleiades cluster contains a large number of binary stars. Credit: NASA, ESA, AURA/Caltech, Palomar Observatory The science team consists of: D. Soderblom and E. Nelan (STScI), F. Benedict and B. Arthur (U. Texas), and B. Jones (Lick Obs.) – http://hubblesite.org/newscenter/archive/releases/2004/20/image/a/

The scenario above, of course assumes that both stars are exactly the same, but this need not be the case. An interesting class of close binary stars (briefly mentioned previously) are the cataclysmic variables stars (CVs). CVs are one possible end product of the evolution of a binary pair. They form when one of the stars in the pair (the more massive one) has evolved into a white dwarf (WD) star. White dwarfs, as the name suggests, are small by astronomical standards – they have roughly the mass of our sun, but are squeezed into the size of the earth. They are extremely hot, and extremely dense – so dense in fact that ordinary gas pressure cannot sustain their bulk and they rely on quantum mechanical forces to keep them from collapsing in on themselves. The companion is a star much like a less massive version of our sun, known as a brown dwarf. The brown dwarf fills the critical Roche lobe, and material from its surface spills over and falls inwards towards the WD primary under the strong gravitational pull.

What happens to this transferred material from here? In the case where the WD in non-magnetic, the material (because it has angular momentum and viscosity) tends to spread out to form a disc – the accretion disc. Accretion discs are in themselves a vast research topic, displaying many modes of fascinating behaviour. They behave somewhat like 2-dimensional stars – friction in the material of the disc generates heat, letting them shine with their own light. Often, the light from the accretion disc can even outshine the central WD which it surrounds. Accretion discs are also somewhat temperamental, undergoing periodic outbursts. An outburst occurs because material cannot fall onto the surface of the WD as rapidly as it transfers from the brown dwarf secondary. Material therefore piles up in the disc, growing denser and hotter. Once the material becomes hot enough to ionise hydrogen, a sudden state change occurs which allows the newly ionised material to accrete at a dramatically increased rate. This is somewhat like pulling the plug on a sink filled with water. As material spirals inwards, it exchanges gravitational energy for heat via friction, becoming brighter. During such an outburst event the entire system can brighten by between 10 and 10 000 fold – a seemingly cataclysmic event!

Historically, such striking increases in brightness, have not gone unnoticed by observers on earth. A number of them have been noted by the ancient star-gazers as “guest stars”, appearing suddenly in the night sky, and have variably been hailed as evil portents, or auspicious heralds, depending on the mood of said astrologer. Today, we known them as Dwarf Novae, the lesser known cousin of the Classical Novae. CVs are also the most plausible progenitors of Type Ia Supernovae (SN Ia), and as such have cosmological significance, as these events are used as standard candles in estimating cosmological distances.

Throwing a magnet in the works

A significant fraction of CVs contain WDs that have strong magnetic fields. These are the so-called magnetic CVs (mCVs). Exactly how accretion takes place in a magnetic environment is still a topic of active research, but the general picture is as follows: As the gas falls down towards the central star, it becomes diverted and channelled by the magnetic field before eventually colliding with the surface of the WD. The magnetic field therefore disrupts the formation of the accretion disc.

This scenario has a terrestrial analogy: When ionised particles from the sun encounter the magnetic field of the earth, they are diverted along the magnetic field lines to fall in at the poles where they collide with nitrogen and oxygen in the atmosphere to create the auroral lights.

In CVs, however, accreting material has a much higher density than the solar wind, and the collision with the WD surface leads to much more energetic phenomena. By the time the material reaches the WD, it is highly supersonic. As it collides with the WD, a shock wave is created where the flow of material changes from relatively cool, supersonic flow to a super-heated subsonic flow. This shock wave is similar to the sonic boom that results from a aircraft exceeding the speed of sound in the earth’s atmosphere. In this energetic collision, vast amounts of energy is released in the form of X-rays and optical light. The collimated flow – known as the accretion column – extends for hundreds of kilometres above the surface of the star, and far out-shines the WD and its companion.

The behaviour of accretion columns is both fascinating and complex. They offer researchers the opportunity to study the behaviour of plasma in an environment with temperature, pressure and magnetic field that is well beyond anything achievable on earth-based laboratories. One interesting phenomenon that results from this intense collision of plasma and star are quasi-periodic oscillations (QPOs). These are semi-coherent changes in brightness that occur on very short time-scales, typically a few seconds, and originate from within the accretion column.

But how, you might wonder, are such brightness fluctuations generated? A surprisingly effective comparison is that of an organ pipe. Sound in an organ pipe is generated when pressurised air is driven through the pipe, causing it to resonate with a characteristic frequency. A similar mechanism may be responsible for generating QPOs, the key difference being that variations in the density of the hot post-shock gas causes variations in the radiation being emitted by that region. The radiation pressure drives the position of the shock front upward (away from the stellar surface), while the gravitational field of the WD provides the restorative force – thus leading to oscillations similar to the way a weighted spring might oscillate.

QPOs with a pinch of SALT

The theoretical picture sketched above has some flaws, most notably the lack of detection of QPOs in X-rays. If the QPOs are generated by oscillations in the position of the shock front, we’d expect to see them both in X-rays and in the optical, yet they are conspicuously absent.

To a certain degree, the shortcoming in our understanding of these phenomena stems from a lack of observations. This is where SALT comes in. Although, as mentioned previously, the accretion column is the brightest part of the system, the variations in its intensity are quite faint, comprising at most a few percent of the total light. That, coupled with the fact that the accretion process generates a great deal of “noise” – incoherent brightness variations generated by the stochastic nature of mass transfer – makes studying the accretion column a challenging prospect. However, in many ways, SALT and the SALTICAM camera are ideally suited to the task, offering the fantastic sensitivity and high time resolution capability that this research requires.

In this study SALT will be searching for quasi-periodic brightness variations in the flickering light from the accretion column in order to learn more about how gas behaves in such a extreme environments, thereby revealing a little more about the mysterious universe we live in.