Posted at 19:40h in Astronomy Articles by Thea Koen

Novae are stellar explosions that take place in binary stellar systems. During these explosions, the star’s brightness increases by many orders of magnitude, and then fades to its initial brightness, and the system survives the explosion. A team of SAAO astronomers led by an SAAO PhD student Elias Aydi, heard of an increase in brightness of a star from their colleagues from Poland, who had used the OGLE telescope in Chile. Their first thoughts were of a classical nova explosion. However, after two months, the star’s brightness was not fading like classical novae usually do. Hence, the team requested Director’s Discretionary Time from SALT to obtain spectroscopic observations of the object in order to identify its peculiar nature. The object was observed during two nights using RSS/SALT in order to study its spectral evolution. At the same time, the object was followed-up with observations from the LCOGT telescopes (hosted in Sutherland) and infra-red observations using the Japanese-South African IRSF telescope also in Sutherland.

The spectroscopy helped to confirm that the object is no doubt a Nova explosion, but simultaneously the photometric OGLE, IRSF, and LCOGT data (see image above) highlighted the peculiarity of the nova that showed a combination of signatures and features from different novae classes (see image of the SALT spectrum below). Discovering and studying such unusual objects is key to understanding the mechanisms responsible for Nova explosions and the post-explosion behaviour of such systems. 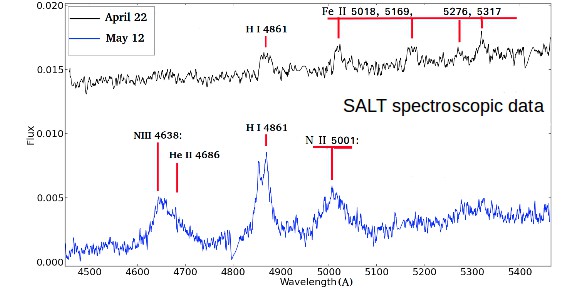 What added even more intrigue and importance to the object was when the team derived an estimate of its distance. It was initially thought to be in the bulge of the Milky Way galaxy. However, after using several methods, it was shown to be much further. The location of the Nova on the sky, its distance, and its spectroscopic features suggest that it possibly is located in the Sagittarius dwarf spheroidal galaxy, a dwarf satellite companion to our Milky Way. If so, it is the first nova explosion ever discovered in a dwarf spheroidal galaxy.