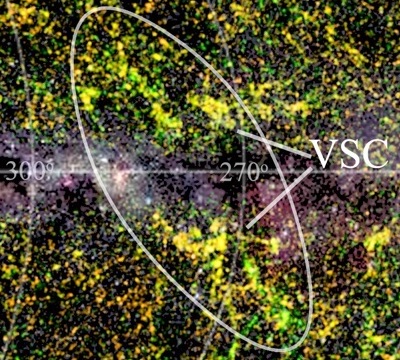 Posted at 11:34h in Press Releases by admin 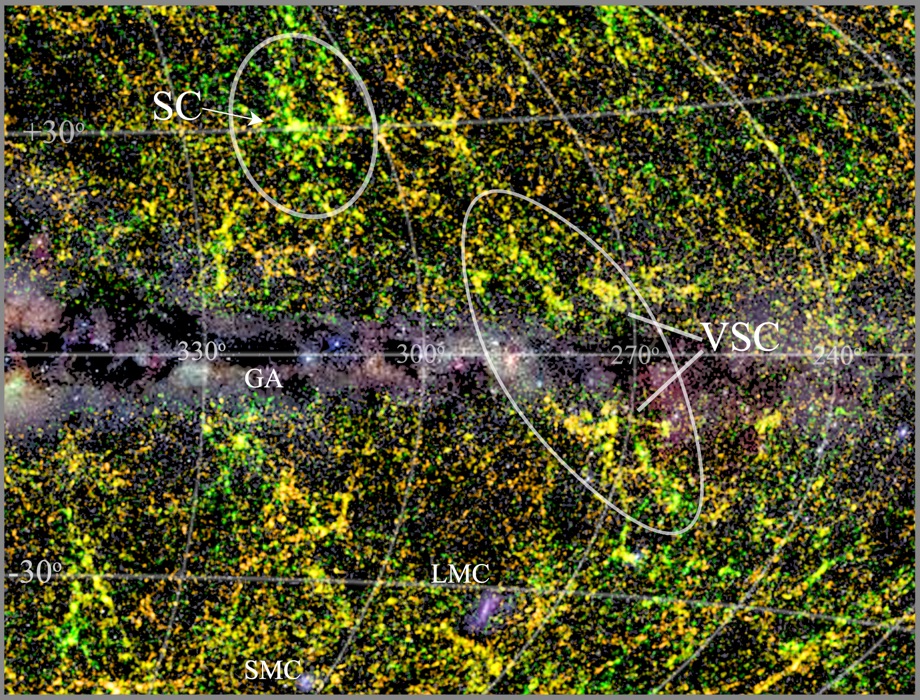 The smoothed distribution of galaxies in and around the Vela supercluster (big ellipse; VSC), including the Shapley Concentration (small ellipse; SC). Image credit: Thomas Jarrett (UCT), based on data from the 2MASS Photometric Redshift catalogue (Bilicki et al. 2014) and the All-Sky Milky Way Panorama (Mellinger 2009).

Observations done with the Southern African Large Telescope (SALT) helped a team of South African and international collaborators to uncover a previously unknown, major supercluster in the constellation Vela. The Vela supercluster might have a significant influence on the motion of our Local Group of galaxies (which includes the Milky Way) and could help resolve some riddles of the observed flows of galaxies around us. The team, led by Prof Renée C Kraan-Korteweg (University of Cape Town), includes Dr Michelle Cluver (University of the Western Cape), Dr Maciek Bilicki (Leiden University, Netherlands), SARChI Chair Prof Thomas Jarrett (University of Cape Town), together with colleagues from the Australian National University and the Max Planck Institute for Extraterrestrial Physics (Munich, Germany).

An international team of astronomers has discovered a previously unknown major concentration of galaxies in the constellation Vela, which they have dubbed the Vela supercluster.

Now a team from South Africa, the Netherlands, Germany, and Australia, led by Professor Renée C Kraan-Korteweg from the University of Cape Town, has discovered another major supercluster, slightly further away in distance (800 million light-years), which covers even more sky than Shapley. The Vela supercluster had gone unnoticed due to its location behind the plane of the Milky Way, where dust and stars obscure background galaxies, resulting in a broad band void of extragalactic sources. The team’s results suggest the Vela supercluster might be as massive as Shapley – and, given the relative proximity in space of these major structures, this might actually pose a cosmological conundrum.

The discovery was based on multi-object spectroscopic observations of thousands of partly obscured galaxies. Observations in 2012, with the refurbished spectrograph of the Southern African Large Telescope confirmed that eight new clusters reside within the Vela area. Subsequent spectroscopic observations with the Anglo-Australian Telescope in Australia provided thousands of galaxy redshifts and revealed the vast extent of this new structure.

Despite her decade-long quest of charting the galaxy distribution hidden by the Milky Way, Prof Renée Kraan-Korteweg said: “I could not believe such a major structure would pop up so prominently” when she and colleague Dr Michelle Cluver (of the University of the Western Cape) analysed the spectra almost as soon as the photons hit the spectrograph.

Cluver said: “As I looked at each new spectrum, it became obvious we were uncovering a massive network of galaxies, extending much further than we had ever expected.”

Following the discovery of this substantial structure, the team assessed its cosmological impact. Such huge galaxy concentrations attract matter through their immense gravity, and shape the pattern of cosmic flows on enormous scales. As co-author Dr Maciej Bilicki stated: “Despite its large distance from us, the Vela supercluster might have a significant influence on the motion of our Local Group of galaxies (which includes the Milky Way) and could help resolve some puzzles in the observed flows of galaxies around us.”

But there is still much to do – further follow-up observations are needed to determine the full extent, mass, and influence of the Vela supercluster. So far this region of the sky is sparsely sampled, while the part closest to the Milky Way has not been probed at all because dense star and dust layers block our view.

The central core of the supercluster can only be mapped with dedicated radio surveys that can penetrate this “Zone of Avoidance” (ZOA). It is here that the South African Square Kilometre Array Pathfinder, MeerKAT, can pave the way. Kraan-Korteweg said: “We have proposed to use this powerful radio telescope in early-science mode (when 32 of its total of 64 dishes are in place) during 2017 for a systematic search of the fully hidden core of the supercluster.” Meanwhile, the supercluster’s outer edges will be mapped with the innovative new instrument Taipan, which will start science operations in 2017. Taipan includes an innovative starbugs optical fibre positioner and a purpose-built spectrograph.

The future is promising. As co-author Professor Matthew Colless, from the Australian National University, said: “This intriguing evidence for a previously unsuspected supercluster will be tested in the next year or so. The upcoming Taipan optical survey, and the WALLABY and MeerKAT radio surveys, will map the region thoroughly and reveal any shy giants hiding behind the Milky Way.”