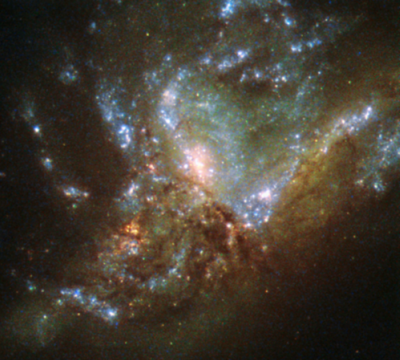 22 Aug The Evolution of Galaxies

Posted at 13:41h in Astronomy Articles by Thea Koen 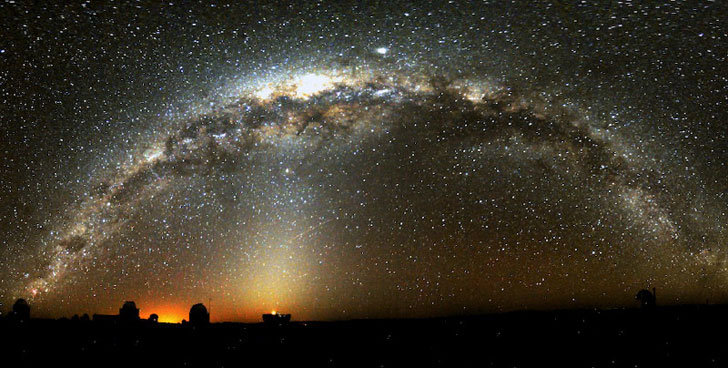 The milky way over the Observatory plateau in Sutherland. Credit: Dr Stephen Potter

On a clear dark night, the view of the night sky from Sutherland is spectacular. An arch of light known as the Milky Way stretches overhead. This is the light from thousands of stars in our galaxy, seen from our unique perspective within the galaxy’s stellar disk. Our Milky Way is a spiral galaxy that contains billions of stars like the sun, as well as gas, dust and an unknown substance that doesn’t produce any light of its own, simply called “dark matter”. From our vantage point in the Southern Hemisphere our two nearest neighbouring galaxies, the Magellanic Clouds, are also prominent features of the night sky. Each of these small companions to the Milky Way has millions of stars. Andromeda, a large spiral galaxy not dissimilar to our own galaxy, may just be visible to the naked eye, although it’s much harder to see. With binoculars or a telescope, the universe beyond the Milky Way opens up even further to us. The deeper we look in any direction, the more galaxies we see.

It wasn’t until 1923 that astronomers realized that many of the fuzzy objects they saw through their telescopes were other galaxies outside of our own galaxy, and began to understand what galaxies really are. Measuring distances to far away objects like stars and nebulae (as galaxies were then known) was a challenging task for astronomers of the early twentieth century. The large uncertainties in the measurements lead to heated debates on the size of the Milky Way, which at that time was thought to encompass the whole Universe. With the first definitive measure of the distance to Andromeda made by Edwin Hubble, it became clear that there were objects much further away than the Milky Way was big, and suddenly the Universe had vastly expanded to human eyes. Today we have the technology to observe very distant galaxies in detail using telescopes like the Southern African Large Telescope (SALT). Astronomers use the collected data, often interpreted together with computer simulations, to unravel how the wide variety of galaxies we see, formed and evolved.

Observations of galaxies are understood within a cosmological framework, that is, a theory for the origin and evolution of the Universe as a whole. Our current picture is that the Universe is expanding, having started out in a very hot, dense phase at the beginning of time, the Big Bang. Tiny fluctuations in the distribution of matter in the early Universe caused some regions to be slightly denser than others. Where there is more mass, there is a stronger gravitational pull, so these over densities attracted even more material, drawing together more and more dark matter and gas into clumps. Larger structures formed as these clumps collided and merged together under the influence of gravity. Within the densest parts of these structures, gas began to cool down and collapse together to form stars, the seeds of the galaxies we see today. Over time, as gravity continued to pull matter together, groups and clusters consisting of tens or even hundreds of galaxies formed. The galaxies themselves grew by merging with other galaxies and pulling in fresh gas, material for new stars, from the cosmic web. As two merging galaxies spiral together to eventually form a single larger galaxy, their shapes are distorted and streams of stars are flung far beyond their original disks. Many of the curiously shaped galaxies we observe are probably mergers, caught in the act. Our own galaxy is no stranger to this process – streams of stars found in its outer reaches show that we have cannibalized many dwarf galaxies in the past, and the same fate awaits the Magellanic clouds. Over the next few billion years we will edge closer to Andromeda before eventually colliding with it to become one massive galaxy. The story of galaxy formation is then largely a story of gravity counteracting the expansion of space itself. 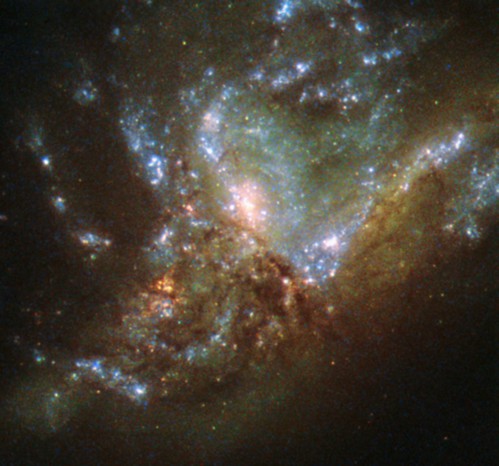 Image taken by ESA/Hubble & NASA. Two galaxies merging in the constellation of Hercules.

Dark matter is a key ingredient in this process. Like seeing only the tip of an iceberg above water, there is much more to every galaxy than the light we see. Most of the mass in galaxies does not emit any radiation so we infer its presence from its gravitational signatures rather than any direct evidence. Because dark matter is only affected by gravity, and we have a good understanding of how gravity works, we can straightforwardly simulate how the universe would evolve with dark matter alone. Adding gas adds huge complexity to the physics. As stars evolve, they clear material from their surroundings through powerful winds and supernovae explosions. Gas may be driven completely out of the galaxy, where it can no longer form new stars. Active black holes at the centres of galaxies also produce vast amounts of energy that may affect the gas throughout the galaxy. Galaxies found in groups are likely to have a very different history to isolated galaxies. They are affected by tidal forces from nearby galaxies, and by the hot gas that surrounds galaxies in large groups. To form a complete picture of galaxy evolution we need to explore all of these aspects, from star formation and black holes to galaxy mergers and the largest structures in the universe. Although that sounds like a daunting task, astronomers aren’t easily deterred by problems on an enormous scale!