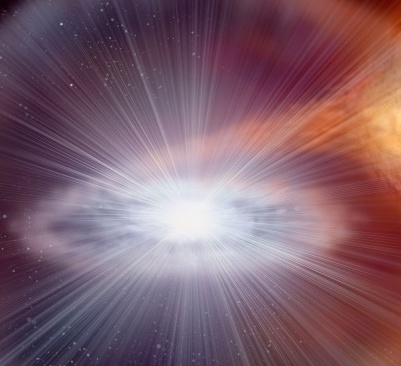 11 Oct Discovery of a Bright Nova

Posted at 21:09h in Press Releases by admin

Discovery of one of the most luminous eruptions from a dying star: SALT contributes to a major international multi-wavelength effort led by South Africa. 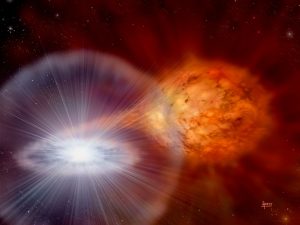 Above: Artistic impression of a nova eruption – Credit & Copyright: David A. Hardy & PPARC.

A multinational group of astronomers have discovered what it might be the brightest nova (a luminous stellar eruption) ever observed. This mighty eruption was first detected on the 14th of October 2016 by the MASTER-instrument in Argentina. Since then it has attracted the interests of astronomers around the world, who have pointed their ground-based and space telescopes, in an attempt to understand the different aspects of the eruption.

Novae are actually binary stars, involving a white dwarf (dead star) pulling material from a close companion star that is very similar to the Sun. The material transferred to the white dwarf builds up on its surface leading to an increase in the pressure and density. When the pressure and density reach a critical stage, a thermonuclear eruption is triggered on the surface of the white dwarf equivalent to a million hydrogen bombs. During the eruption, the brightness of the star increases dramatically sometimes appearing as a new naked-eye star in the night sky hence the name nova or “new star”. The system survives the eruption and after a year or so from the nova event, the white dwarf resumes pulling material from its donor.

The new study led by Elias Aydi, a PhD student jointly affiliated with the South African Astronomical Observatory (SAAO) and the University of Cape Town (UCT), has been accepted for publication in the Monthly Notices of Royal Astronomical Society journal today. The study is based on optical observations from the Southern African Large Telescope (SALT) in Sutherland (South Africa), MASTER-instruments in Sutherland and Argentina, the Las Cumbres Observatory (LCO) telescope in Australia, the SMARTS, OGLE, and SOAR telescopes in Chile, and X-ray and ultraviolet observations from the Swift satellite. 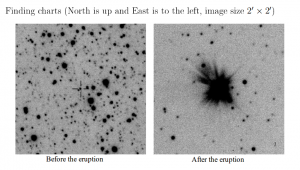 Above: The nova system before the eruption (left) and in outburst (right). – Credits: OGLE survey.

The newly discovered very bright nova, named SMCN 2016-10a, is located toward the Small Magellanic Cloud (SMC), a small galaxy near the Milky Way, at a distance of around 200,000 light years away from us. When a Nova eruption takes place, the brightness of the star increases in a matter of a few days to reach a maximum and then decreases gradually. Nova SMCN 2016-10a reached a maximum brightness no previous nova in the SMC has ever attained. It is also at least as bright as Nova CP Pup and nova V1500 Cyg, the two brightest novae ever observed. “We are very excited to discover such extreme events which occur only rarely, especially in the SMC,” said the study’s leading author Elias Aydi. He then adds, “a combination of several factors such as the mass of the white dwarf, its temperature and chemical composition might be responsible for such a luminous eruption”. Despite the extreme brightness of the eruption, at a distance of 200,000 light years in a neighbouring galaxy, it is not possible for our naked eyes to see the nova. Such a distance also means that the eruption took place around 200,000 years ago and the light has just reached us now.

According to Aydi, “we used observations from the MASTER-instruments at Sutherland and Argentina along with the SMARTS telescope to estimate the maximum brightness reached during the eruption leading us to the main conclusion.” After its unprecedented peak brightness, the brightness of Nova SMCN 2016-10a decreased quickly in a matter of few days which tells us that the white dwarf is quite massive, probably about 1.3 times the mass of the Sun. The study co-author Patricia Whitelock, from the SAAO and UCT, stated that “In such systems, if the white dwarf keeps soaking up matter and grows beyond 1.4 times the mass of the Sun, there is a good chance that it will detonate in a really big explosion, what we call a supernova, blowing up both of the stars and anything else that gets in the way.”

SAAO astronomer, and co-author, David Buckley explained how “The SALT high-resolution spectroscopy along with other data from the Las Cumbres Observatory have helped us understand the material involved in the eruption and even to measure their speeds, which reached just under a million kilometre per hour.” Buckley also elaborated on the ability of SALT, the biggest single optical telescope in the south, to follow up rapidly on such events providing us with particularly high-quality data.

According to study co-author Kim Page, an astronomer from the Swift satellite team and the University of Leicester in the UK, “Swift’s ability to respond rapidly, together with its daily planned schedule, makes it ideal for the follow-up of transients, including novae. We were able to follow Nova SMCN 2016-10a throughout its eruption, starting to collect very useful X-ray and UV data within a day of the eruption being reported.” The X-ray observations were essential to constrain the mass of the white dwarf in the system. 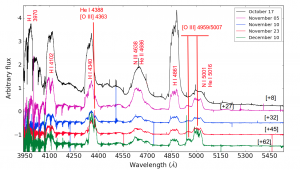 Above: A sample of the SALT high resolution spectroscopy.

Nova events are frequently observed in the Milky Way with a rate of around 35 eruptions per year, but they are much rarer in the SMC. Nova SMCN 2016-10a is the first nova to erupt in the SMC since 2012, which adds importance to the event. From the Mullard Space Science Laboratory of the University College London, study co-author Paul Kuin says that “the present observations provide the kind of coverage in time and in spectral colour coverage what is needed to make progress in gaining an understanding of a nova in the neighbouring galaxy.” Kuin emphasizes that “Observing the nova in different wavelengths using world-class telescopes such as Swift and the SALT help us reveal the condition of matter in nova ejecta as if it were nearby.”