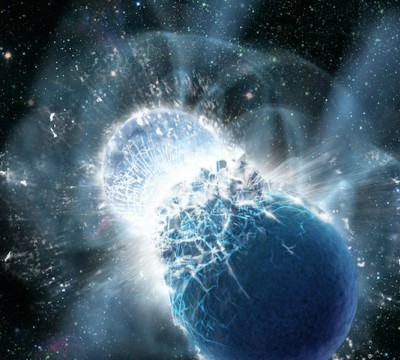 Posted at 14:00h in Press Releases by Thea Koen

SALT and SAAO telescopes partake in an unprecedented international collaboration to investigate the origin of the first detection of gravitational waves produced by two colliding neutron stars. 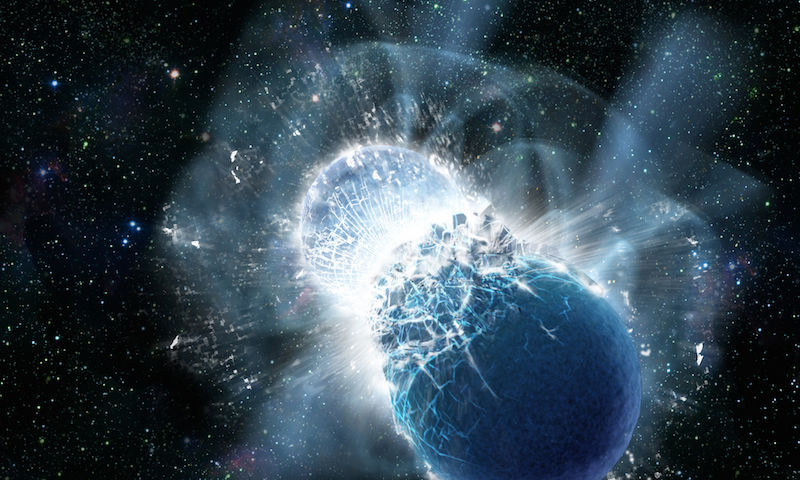 The discovery marks the birth of a new era in astrophysics, the first cosmic event observed in both gravitational waves and light.  SALT and other SAAO telescopes have provided some of the very first data in what is turning out to be one of the most-studied astrophysical events ever.

The South African Astronomical Observatory (SAAO) and the Southern African Large Telescope (SALT) are among the 70 ground- and space-based observatories that observed the cataclysmic explosion of two colliding neutron stars, immediately after their gravitational shock waves were detected by the U.S.-based Laser Interferometer Gravitational-Wave Observatory (LIGO) and the European-based Virgo detector.

Neutron stars are the smallest, densest stars known. They are the remains from massive stars which exploded as supernovae. In this particular event, dubbed GW170817, two such neutron stars spiraled inwards and then collided, emitting gravitational waves that were detectable for about 100 seconds. The collision also resulted in a kilonova explosion of light, initially in the form of gamma rays which were detected by space-based telescopes.  The gamma rays were then followed by X-rays, ultraviolet, optical, infrared, and radio waves.

This allowed astronomers to localise the event within hours and launch follow-up observations by SALT and numerous other telescopes in South Africa and around the world.  South African activities also included the first observations contributing to published scientific results by the MeerKAT radio telescope under construction in the Karoo.

Gravitational waves from colliding black holes were first detected only two years ago, and have been detected three more times since then, leading to the 2017 Nobel Prize in Physics being awarded to three US scientists. Black hole collisions, however, are not expected to emit light.  GW170817 is the first time light and gravitational waves from the same event have been observed. 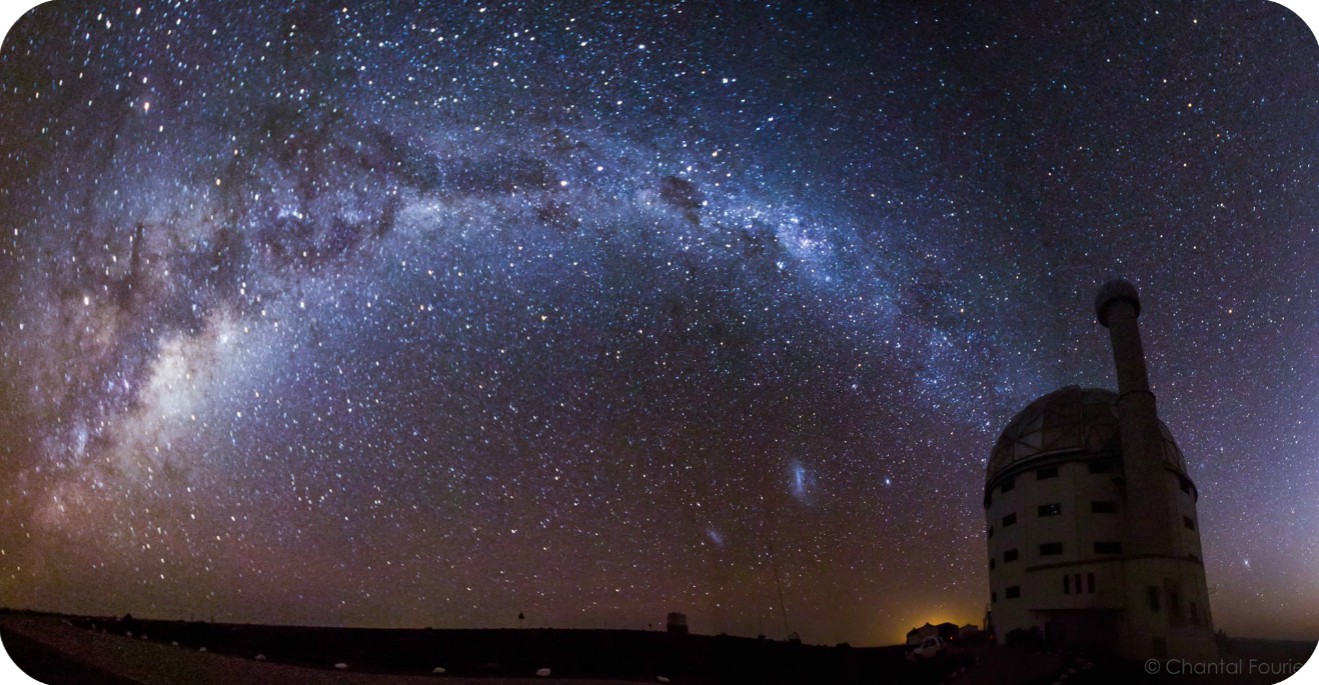 The significance of the present event lies in the combination of the gravitational waves and light.   “Imagine you have only one sense”, explains Petri Vaisanen, Head of SALT Astronomy Operations, who was the observer at SALT during the frantic search for the counterpart for the gravitational wave event.  “All your life you have merely looked at the world.  Two years ago you heard something, voices coming from somewhere around you.   But then, suddenly, you actually see someone talking. How much more will you understand about how the world works when you put those together?  Immensely more.  That to me sums up the momentous discovery, and hints at the possibilities going forward.”

August 18, 2017, the day and night following the LIGO detection and the initial successful searches in Chile for the counterpart, was a busy day for observational astronomers.  “After a flurry of messages and emails that afternoon in Sutherland, I finally got the coordinates”, continues Vaisanen.  “There was a new object, which had caused the whole of space-time to ripple, sitting at the outskirts of the galaxy NGC 4993 some 130 million light years away.  I knew that everyone with a working telescope in the Southern Hemisphere was scrambling to get data on it.  We decided to drop all other plans for that evening, and went for a spectral observation with SALT, since you need a large telescope for such observations breaking up the light into all its colours.  It was a difficult observation since we had to do it in twilight, before it got properly dark.  I’m very proud of the whole team, SALT was only the third observatory to provide a spectrum of the target, and the first spectrum that clearly started showing anomalous behaviour proving that this was no run-of-the-mill transient event”. 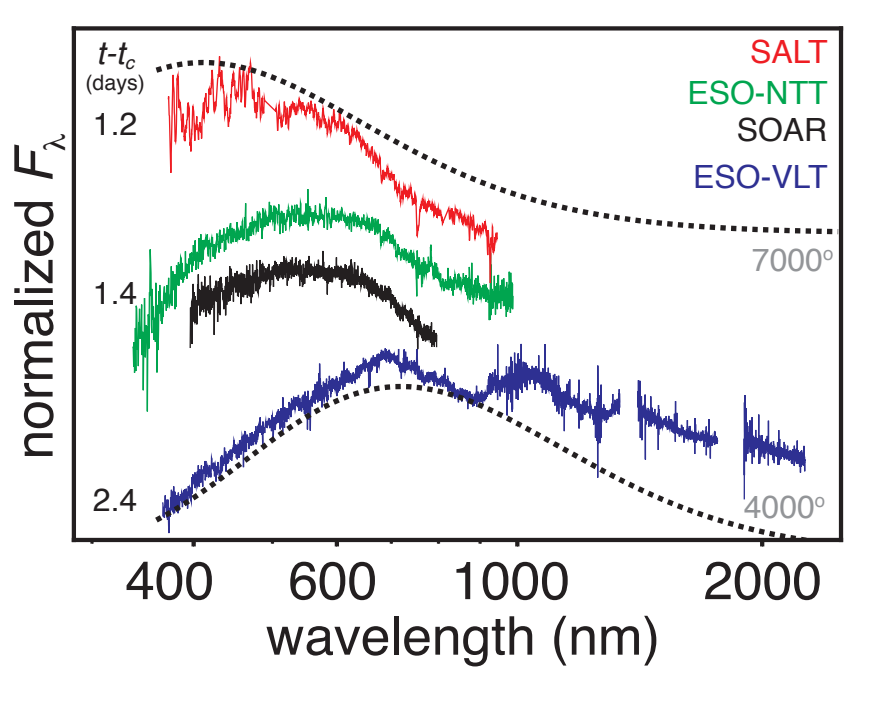 The significance of getting early observations stems from the afterglow of the collision changing very rapidly.  Piecing together the new science from the event requires combining observations spanning the first hours, days and weeks after the merger.  The first SALT spectrum has a very prestigious spot in the combined scientific paper, with thousands of authors and hundreds of institutions. In addition, several, more detailed science papers have also been written based on SALT, SAAO and other Sutherland observations.

“Finally, the irony of the moment for me, anxiously sitting at the telescope that evening looking at the new object, was that just three weeks before I had attended a meeting discussing the future of optical searches of gravitational waves and the SAAO part in it.  There were arguments that it could be decades before we are able to localise such events well enough for observations, and it would probably not be worth expending the effort.  It’s amazing how quickly things change.”

Sutherland telescopes reveal the details of the neutron star merger

Theorists have predicted that what follows the initial collision is a “kilonova” explosion— a phenomenon by which the material that is left over from the neutron star collision, which glows with light, is blown out of the immediate region, far out into space. The light-based observations from other large international telescopes show that heavy elements, such as lead and gold, are created in these collisions and subsequently distributed throughout the universe – confirming the theory that a major source for the creation of elements heavier than iron does, indeed, results from these neutron star mergers. 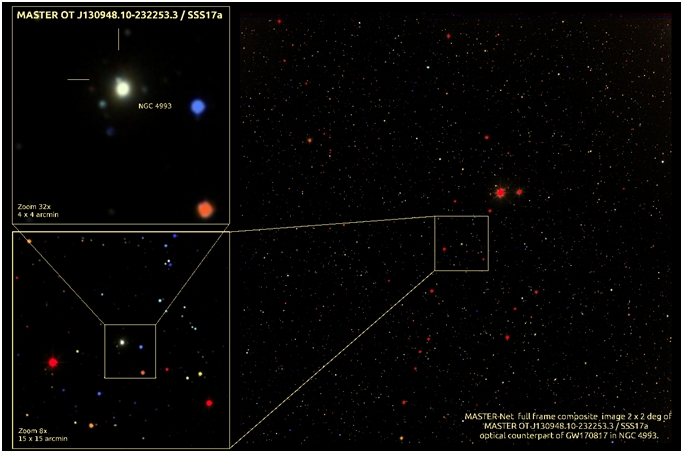 The early SALT observations showed that the explosion was relatively bright and blue. Only two or three days later, further observations by SALT, SAAO and other major international telescopes showed that the light was rapidly fading and turning red, due to the dusty debris blocking the bluer light, as predicted by the theory of the evolution of a kilonova explosion. Simultaneously, MASTER (a joint Russian-South African optical telescope located in Sutherland) and IRSF (Infra-Red Survey Facility; a joint Japanese-South African infrared telescope also in Sutherland) continued to monitor GW170817 for two weeks, showing that it gradually faded in the visible light but brightened in the infrared, consistent with the final stages of the afterglow from the surrounding debris.

The results of this unprecedented event have demonstrated the importance of collaborative multi-messenger observations and mark a new era in astronomy. “The ability of SALT and SAAO telescopes to respond rapidly to unexpected discoveries is a major reason for the success of these observations and will ensure similar successes in the future”, says Dr. Stephen Potter, Head of Astronomy at the SAAO. “We are very proud to have played a major role in such a historical event thanks to the sterling efforts and expertise of SAAO and SALT staff who ensure that our observatory is at the forefront of world-class scientific endeavours.”

The South African Astronomical Observatory is funded by the National Research Foundation. For more information about SAAO : www.saao.ac.za

About the NRF: The National Research Foundation (NRF) was established on 1 April 1999 as an independent statutory body in accordance with the National Research Foundation Act. The NRF is a key public entity responsible for supporting the development of human resources for research and innovation in all fields of science and technology. The organisation is one of the major players in educating and training a new generation of scientists able to deal with South African and African needs. The organisation encourages public awareness and appreciation of science, engineering and technology, and facilitates dialogue between science and society. Its vision is to contribute to a prosperous South Africa based on a knowledge economy. For more information on the operations and programs within the NRF please visit www.nrf.ac.za

About SALT: The Southern African Large Telescope (SALT) is the largest single optical telescope in the southern hemisphere and among the largest in the world. It has a hexagonal primary mirror array 11 metres across, comprising 91 individual 1m hexagonal mirrors. For more information about SALT please visit www.salt.ac.za