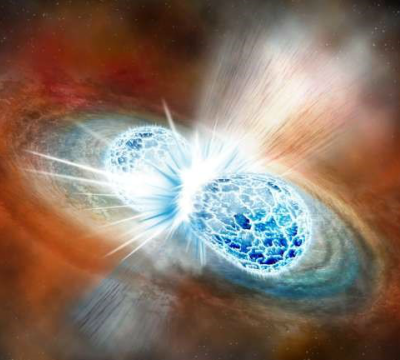 22 Jan Observing the fast & the furious

Posted at 03:17h in Press Releases by Thea Koen

“Observing the fast and the furious:
SAAO observes the first optical counterpart of a Gravitational Wave source” 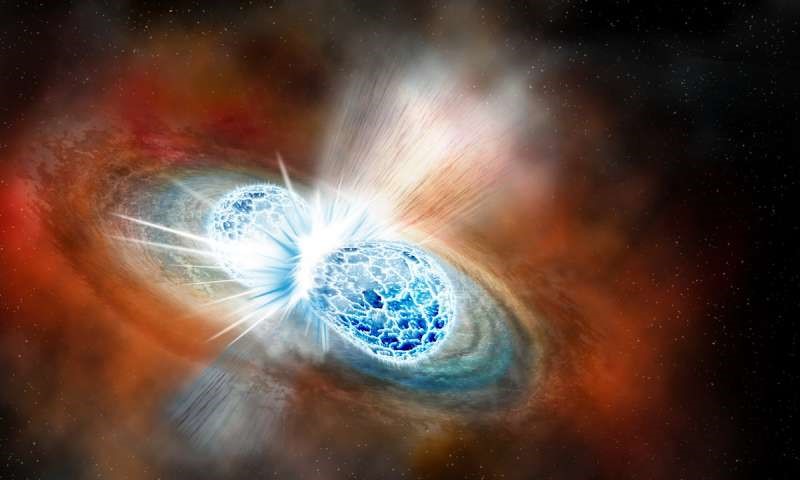 Above: An artist’s impression of a kilonova, the result of two colliding and merging neutron stars, which was the source of the first gravitational wave event (GW170817) for which an electromagmetic counterpart was detected at different wavelengths (picture credit: Robin Dienel; Carnegie Institution for Science).

Following on from the major global announcement in October 2017 on the discovery of the first electromagnetic counterpart of a gravitational wave source, named GW170817, a new paper has just been published on observations undertaken at the SAAO, which are compared to the latest model predictions.

On 16 October 2017, SAAO and SALT, together with many other observatories world-wide, announced the important discovery of the first gravitational wave source counterpart (see https://www.salt.ac.za/news/breaking-news-salt-gravitational-waves/). The preliminary results from SALT and other telescopes at SAAO were featured in a number of multi-institutional investigations utilizing a range of global facilities. This recent paper brings together various observations made at the SAAO to improve upon the original estimates of the luminosity of the remnant kilonova and compares the observations with recent models developed by a Japanese team.

“Our SALT spectroscopic results were improved upon by using simultaneous observations of the kilonova’s brightness at three different wavelengths using the MASTER-SAAO facility.”

MASTER-SAAO is a southern hemisphere node of a global network of small robotic telescopes, operated from Russia, used to discover and observe “transient” events in the Universe. These include counterparts to gravitational wave sources and gamma ray bursts. The MASTER-SAAO observations were used to more accurately estimate the flux measurements made by SALT. These were then compared to recently published models.

The MASTER-SAAO telescope at Sutherland.

“It was fortuitous that only a matter of a few months before the observations, a preprint of a new paper on kilonova models was posted. I contacted the lead author, Professor Masaomi Tanaka of the National Astronomical Observatory of Japan (NAOJ), who kindly shared the detailed results in order for us to compare our results with these models”, says Buckley.

This allowed a direct comparison with the observations made in the optical with SALT and MASTER-SAAO and in the infrared with the Japanese IRSF facility, also situated at the SAAO observatory site, near Sutherland. The results were very interesting, showing that the kilonova evolved rapidly, over a matter of days, from a very blue to a red object, pretty much as the models predicted.

“I was quite struck by the matching of the observations to the predictions in the blue part of the spectrum”, said Buckley, “using just the known distance of the host galaxy. No other parameters needed tweaking.”

This initial blue component, which disappeared after about 2 days, was consistent with ultraviolet observations made at an earlier time by the Swift satellite.

The SAAO observations, taken over a period of about 9 days, showed broad agreement with the predictions of the new kilonova models. These show a rapid reddening of the spectra over timescales of days. The results confirmed the conclusions of other investigators that the kilonova explosion, resulting from the rapid (less than a minute) merger of two neutron stars in orbit about each other, resulted in the ejection of a fast (5% to 10% the speed of light) outflow of material, which was observed at a high angle to the orbital plane of the neutron stars.

It was only through good fortune that the SALT observations were able to be undertaken. The information on the position of the optical counterpart to GW170817, crucial for any SALT follow-up, was only received a few hours before the telescope could observe, from the US and Australian co-authors. As Dr Petri Väisänen, also one of the papers co-authors and the SALT Astronomer observing that night commented:

“After a flurry of messages and emails that afternoon in Sutherland, I finally got the coordinates in time to make the observation, which was only just reachable by SALT during the twilight. SALT was only the third observatory worldwide to provide a spectrum of the target, showing the anomalous behaviour and proving that this was no run-of-the-mill transient event”.

Once the target position had been determined, a SALT target-of-opportunity observation was then undertaken using Director’s Discretionary Time. The first SALT observation was taken 1.2 days after the initial gravitational wave trigger. This delay was due to the time it took other imaging telescopes to survey the large area where the event occurred in order to locate its optical counterpart.  SALT was able to take one more observation, on 19 August, before it was well and truly lost as the kilonova faded rapidly and was overwhelmed by the bright twilight sky.

“We were really fortunate that the event didn’t happen two days later, otherwise we’d never have had the opportunity to observe it with SALT”, says Väisänen.

SALT and SAAO had been poised for some time to make such an observation, since the original discovery of the first gravitational wave event in September 2015. Dr Stephen Potter, the SAAO astronomer with responsibility for attempting follow-up observations of gravitational wave sources expressed his delight at the results:

“I had heard from one of our Chinese collaborators about the event and was in contact with David Buckley, who is Principal Investigator of the SALT transient programme and was overseas at the time, about triggering a SALT observation, once an accurate position was determined. We were getting rather desperate at the prospects of getting a precise enough position in time for a SALT observation. But in the end it came in the nick of time and we did it!”

As is happened Buckley was attending a conference on transients in Russia, on board the conference dinner boat on the Moscow river, when the news arrived of the detection of GW170817. However, it was only the following day, when he was travelling home, that the final all-important positional information became available. Other co-authors were able to ensure that the observations were undertaken and the data reduced quickly.

Because of the quick response of SALT and other SAAO telescopes, crucial information on the nature of the gravitational wave source was obtained. These have resulted now in the publication of 8 refereed papers containing observations conducted at the SAAO with the three different telescopes (SALT, MASTER-SAAO and IRSF), including the paper which is the subject of this press release.

As the final comment in the paper says: “The detection of an electromagnetic counterpart to a gravitational wave source, coming only 2 years after the first gravitational wave detection, bodes well for the study of future gravitational wave neutron star merger events. The ability of SALT to respond promptly and appropriately to transient alerts, in this case the GW170817 event, is one reason for the success of the observations reported here and will hopefully result in similar successes in the future.”

[David Buckley will be delivering a public lecture at SAAO on Saturday 27 Jan entitled “Gravitational Waves: the new frontier in Astronomy”.]

“A comparison between SALT/SAAO observations and kilonova models for AT 2017gfo: the first electromagnetic counterpart of a gravitational wave transient – GW170817”